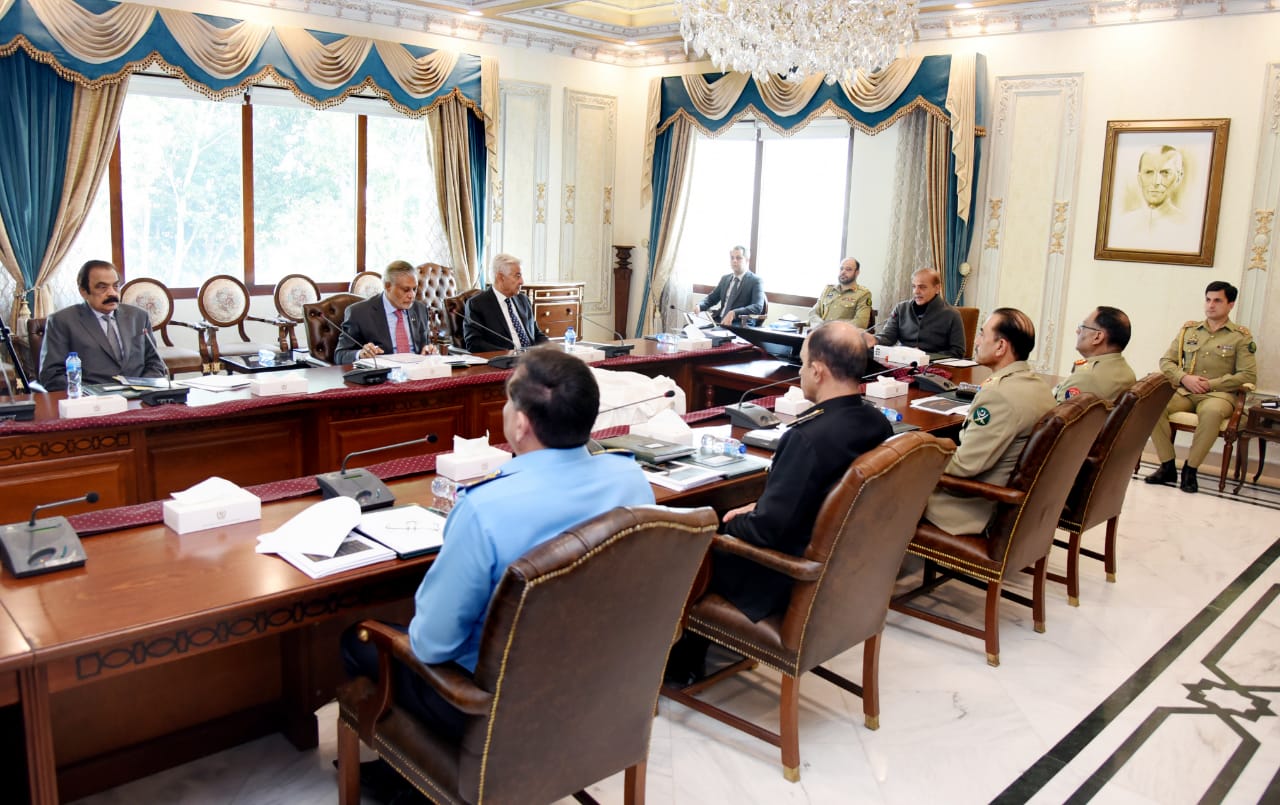 Islamabad, The 40th meeting of National Security Committee (NSC) was concluded today under the chairmanship of Prime Minister of Pakistan, Mr Shehbaz Sharif. The meeting was attended by relevant Federal Cabinet members, Chairman Joint Chiefs of Staff Committee, all Services Chiefs, and heads of intelligence services.

The forum underscored that comprehensive ‘National Security’ revolves around economic security and that sovereignty or dignity comes under stress without self-sufficiency and economic independence.

The forum undertook a comprehensive view of the ongoing economic situation vis-à-vis challenges being faced by the common people of Pakistan, particularly the lower and middle-income classes. The finance minister briefed the forum about the economic stability road map of the government including the status of discussions with international financial institutions, exploring other financial avenues based on mutual interests as well as relief measures for common people. In order to strengthen the economy, the committee agreed on undertaking concrete steps including imports rationalization as well as preventing illegal currency outflows and hawala business. Emphasis will be especially made to improve agricultural output and manufacturing sector to ensure food security, imports substitution and employment. It was resolved that people centric economic policies with trickle down effects to common people will remain priority. It was also agreed to involve all stakeholders for consensus to realize effective and fast track economic recovery and road map.

While taking into account the efforts for mitigating the challenges of 33 Million flood affectees, forum resolved to mobilize all resources for their rehabilitation and reconstruction in coordination with the Provincial Governments and multilateral financial institutions. Forum also appreciated the ongoing relief efforts led by the PM and federation units.

The committee was also apprised on the security situation of the country with particular focus on recent terrorist incidents in KPK and Balochistan. Prime Minister emphasized that the war against terrorism will be led by federal and provincial governments as per National Action Plan in accordance with National Internal Security Policy with people centric socio-economic development as priority while Armed Forces will provide resolute deterrence and secure conducive and enabling environment. Provincial Apex Committees are being revived in full earnest and LEAs especially CTDs will be brought upto the required fighting standards with requisite capabilities. The forum concluded that no country will be allowed to provide sanctuaries and facilitation to terrorists and Pakistan reserves all rights in that respect to safeguard her people.

NSC reiterated its resolve to have zero tolerance for terrorism in Pakistan and reaffirmed its determination to take on any and all entities that resort to violence. This will be dealt with full force of the state. Pakistan’s security is uncompromisable and the full writ of the state will be maintained on every inch of the Pakistan’s territory.