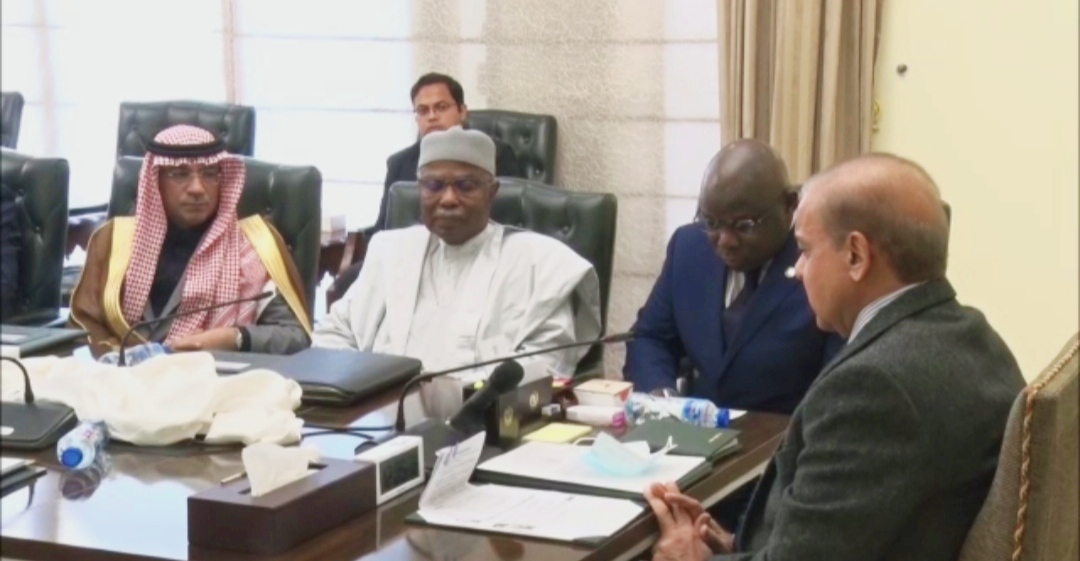 The OIC Secretary General is visiting Pakistan on his first country visit since he assumed office in November 2021.

Whilst highlighting the grim human rights and humanitarian situation in the Indian Illegally Occupied Jammu and Kashmir (IIOJK), Prime Minister Shehbaz Sharif appreciated OIC’s principled position and consistent support for the resolution of Jammu and Kashmir dispute in accordance with the relevant UN Security Council resolutions and the aspirations of the Kashmiri people.

Welcoming the Secretary General’s historic visit to AJK and Line of Control (LOC), the Prime Minister underscored that his visit would send a strong message of support from OIC to the Kashmiri people in their just struggle for the right of self-determination.

The Prime Minister also renewed unwavering support of the People and Government of Pakistan to the Palestinian people and Palestinian cause. He reiterated that any solution of the Palestine issue must be based on pre-1967 border with Al-Quds Al- Sharif as its capital.

While recognizing that the OIC has stepped-up its engagement with Afghanistan since the Extraordinary Session of the OIC Council of Foreign Ministers (CFM) in Islamabad in December 2021, the Prime Minister encouraged the Secretary General to accelerate efforts for addressing and alleviating the humanitarian challenges faced by the people of Afghanistan.

The Prime Minister reiterated the need to counter the rising anti-Muslim hatred and attempts to denigrate the sanctity of the Holy Prophet Muhammadﷺ (S.A.W). He expressed concern over intensifying of Islamophobia campaign, particularly in our region, where anti-Muslim and anti-Islam agenda was being pursued as an instrument of state policy.

The OIC Secretary General reiterated OIC’s full support for the resolution of Jammu and Kashmir dispute, in accordance with the relevant UN Security Council resolutions.

He also offered his condolences over the loss of life and livelihoods caused by the recent climate induced floods in Pakistan.
The Secretary General assured the Prime Minister of the OIC Secretariat’s full support and cooperation during Pakistan’s remaining term as the Chair of the OIC’s Council of Foreign Ministers (CFM).