PAF PERFORMS AIR TO AIR REFUELLING DURING THE DEPLOYMENT OF FIGHTER JETS AT BAHRAIN AIR SHOW. 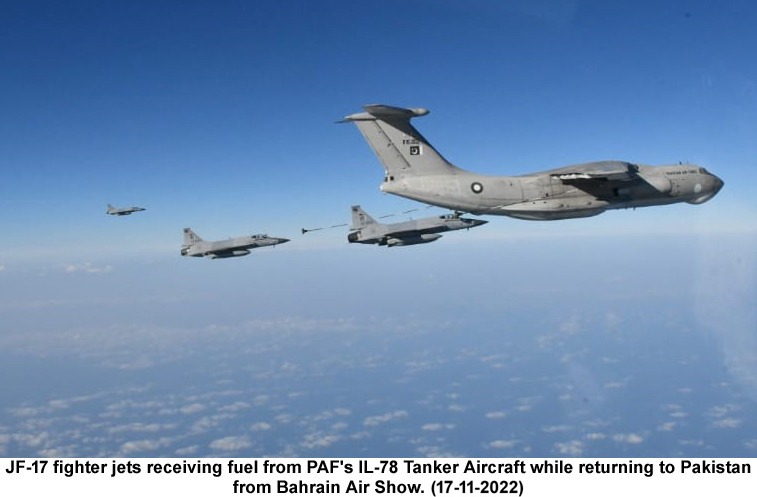 Islamabad, Pakistan Air Force performed Air to Air Refuelling during the deployment of JF-17 Thunder aircraft at Bahrain International Air Show, BIAS 2022. Although PAF has been successfully conducting inland air to air refuelling during operational missions and exercises, however, the capability was further consolidated by conducting air to air refuelling on international waters through PAF’s own tanker aircraft during a long haul ferry mission.

PAF deployed three of its JF-17 fighter jets at Bahrain International Air Show with an in-flight support of its mighty IL-78 tanker aircraft. During the non-stop flight of jets from an Operational Air Base to Bahrain and on their way back to the country, inflight refuelling was carried out by PAF JF-17 Thunder aircraft achieving yet another milestone which marks a significant step towards impregnable aerial defence of motherland. This indeginous and important achievement depicts the thorough professionalism and sound technical training of PAF personnel.

Where PAF’s JF-17 Thunder remained the star attraction of Bahrain International Air Show, this epoch-making event of mid air refuelling over international waters has enhanced the capability, capacity and lethality of PAF’s fighter fleet in addition to augmenting the overall combat effectiveness and efficiency of Pakistan Air Force.