Ammad Parkour, A Son of Mountains. 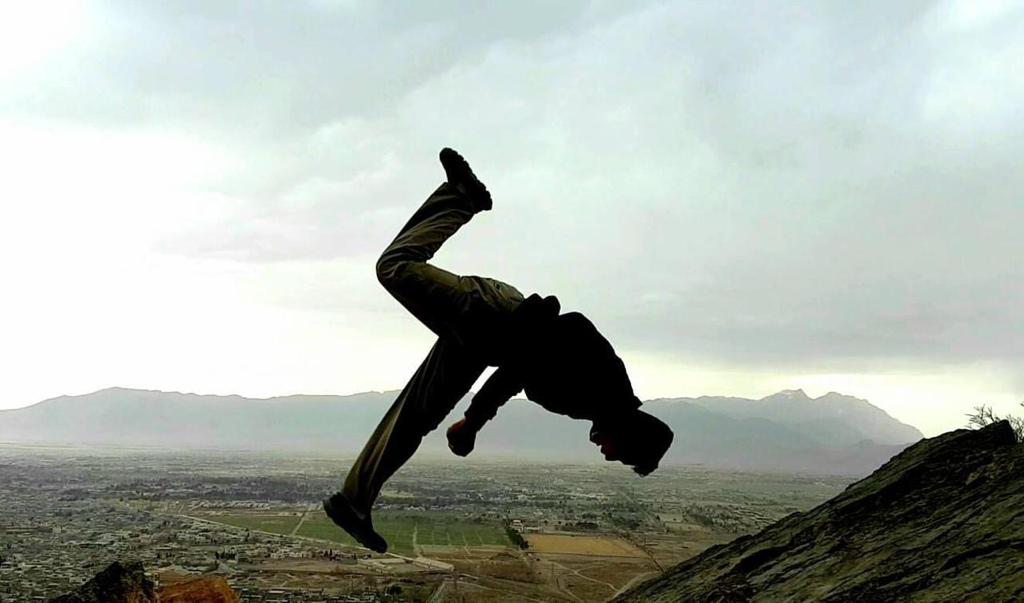 Parkour began in Pakistan nine years ago, and involves physical activities that include running, gymnastics and strength training. As the extreme sport marked its debut in the 2022 World Games in the US, the sporting aspect of parkour is still being explored, while the film and entertainment industry views it through a glamourous lens. Previously, included in the gymnastics category, it is now generally agreed that the soul of the skill is to find balance and peace within oneself and get accustomed to the surroundings.

Originating in France in 1990, parkour incorporates movements that range from swinging, plyometrics, running, crawling, rolling, running up the wall, climbing, and precision jumping over obstacles such as walls, buildings and stair railings, to name a few.

While it slowly grew in popularity from France to entire Europe and to North America, in Pakistan, the street sport became accessible through internet, and its adaptation among Hazara youth in Quetta is fascinating.

For Ammad and his team, parkour or free running is more than a sport, a discipline or an art form. It is their way of life. These young men are inspired by Jackie Chan, martial arts and military combat training that uses ordinary objects and buildings as obstacle courses to help develop physical and mental strength.

Parkour practitioners called traceurs use urban infrastructure to master their techniques. Unfortunately, the Hazara youth don’t have much access to that or gyms. But for them, parkour is a way to express themselves and channel their anxieties of living in an oppressive environment.

Twenty-four year old Ammad who insists on Ammad Parkour being his full name, belongs to the Hazara community which has seen persecution for decades. Growing up in a restricted area surrounded by uncertainty and the Frontier Corps (FC) personnel, he feels that parkour helps him when he needs to break free from limitations.

“Parkour was love at first sight for me, as I was always fascinated and excited to see Jackie Chan and his stunts in movies,” says Ammad who began his sporting journey when he was 13. “There were older boys who were doing parkour, so after learning wushu for a year in Quetta, I decided to learn parkour techniques and polish them with time.”

When he discovered a local club that taught wushu and martial arts, he would sneak away for training. “I learnt quickly and couldn’t wait to jump and flip,” he says with a glint in his eye.

Apart from learning the basics from his friend Mustafa Ahmedi, Ammad trained for parkour through YouTube videos and the regional online community of parkour artists from Pakistan, Afghanistan, India and Iran. They exchange tips and techniques, and inspire each other as a subculture.

“Since there are no coaches for parkour in Pakistan,” he says, “we all began supporting each other, learning the techniques from YouTube and other online resources that we could find. As a team, we worked on techniques and stunts, and started choreographing our performances. There is lots of trial and error, which has its own perils.”

Ammad explains that doing stunts and performances is not always easy, as perfecting a technique can take months, while choreographing requires time and coordination. “I follow Pasha “The Boss” [Pavel Petkuns, a Latvian freerunner] and Jackie Chan’s earlier work for inspiration on new stunts and flips,” he says. Meanwhile, the rest of his team follow their own favourites for different movements.

“Of course parkour is a dangerous sport, so my family never supported me on this,” says Ammad, whose family had disapproved of his decision to pursue sports, and things got worse when he decided to completely focus on parkour. His father’s main concern being that parkour was particularly dangerous and performers often get injured.

“I feel parkour is in my blood,” he says. “The Hazara community is incredibly involved in sports, and in the recent years we have produced many martial artists. I understand that my family has valid reasons for not being supportive because my wrists and legs do get injured regularly.”

When Ammad injured his spinal cord, he was bedridden for over six months. “It was the darkest time for me,” he recalls. “We had no health insurance so my family had to bear all the expenses, and it made me realise that there is no safety net for most sportsmen in Pakistan, let alone freerunners.”

“Our area is guarded by the FC, and we can only practice on the ground as there are hardly any obstacles or big buildings,” he says. “But if we spot a new building being constructed, we go there to practice our flips and tricks using sand as our mattress. Often we get told off by the chowkidars (guards), so we try to practice discreetly to avoid that, but how can you do parkour and not get noticed!”

The surroundings they live and practice in may be a reminder of the uncertainty and lack of security in their lives, but these hurdles only strengthen Ammad’s ambition to create a platform for future parkour practitioners.

“Parkour has a tremendous personal value for us,” he explains. “We feel that it is our difficult life that breaks our bones and hurts us in unusual ways. Parkour brings peace to us by channelling our stress and anxieties in a positive manner. If it had not been parkour, it would have been wushu or body building instead. Parkour has a therapeutic affect that only practitioners can understand. This is why I want to encourage young people to do parkour.”

Clearing peoples’ misconceptions about parkour in Pakistan is one his biggest challenges. “Parkour is so misunderstood in our country,” says Ammad, “It is an art and a skill that somehow in Quetta is only being kept alive by the Hazara Parkour Club.”

But his exasperation has a tinge of hope as he has resolved to dedicate his life to promoting parkour. “As a sport, it needs public and government attention,” he says. “Since there are no training facilities such as quality gyms or even open spaces with soft sand available for parkour, we practice on building sites which makes it more dangerous in general perception.”

Ammad who works as a graphic designer by day would like to see parkour flourish in Pakistan and that means more to him than becoming famous himself. “We have tried to talk to the members of the parliament from our area many times, but they fail to understand that we need these facilities,” he says. “We got injured because we learnt and practised outdoors but for newcomers, we need accessible training facilities to prevent accidents and injuries.”

As the manager of Hazara Parkour Club, Ammad claims that the club is home to all parkour artists active in the country. “We have 12 active parkour artists from 15 to 30 years of age,” he says. “Despite no unified platform for parkour in Pakistan, it is high time that sponsors come forward as parkour has a great scope in local and international sports, and entertainment industries. It is simply a skill that sells.”

But even when that happens, issues regarding remuneration for their work still have to be tackled. “We only get paid Rs 100,000 for one commercial and we have to arrange our own travel and logistics,” Ammad explains. “Considering it is an extreme sport, insurance against injury or disability is important.”

Ammad’s efforts to register parkour with the Pakistan Sports Board have been in vain and he has realised that to meet relevant government officers is a herculean task. “For several months, I went to their office,” he says. “But they never let me in and I couldn’t meet the officials, so I feel that perhaps there is politics involved in sports.”

Flipping, jumping, rolling and spinning despite the challenges he confronts, Ammad believes that his team is gradually paving the way for parkour to grow in Pakistan and to change people’s perception about this fascinating discipline.