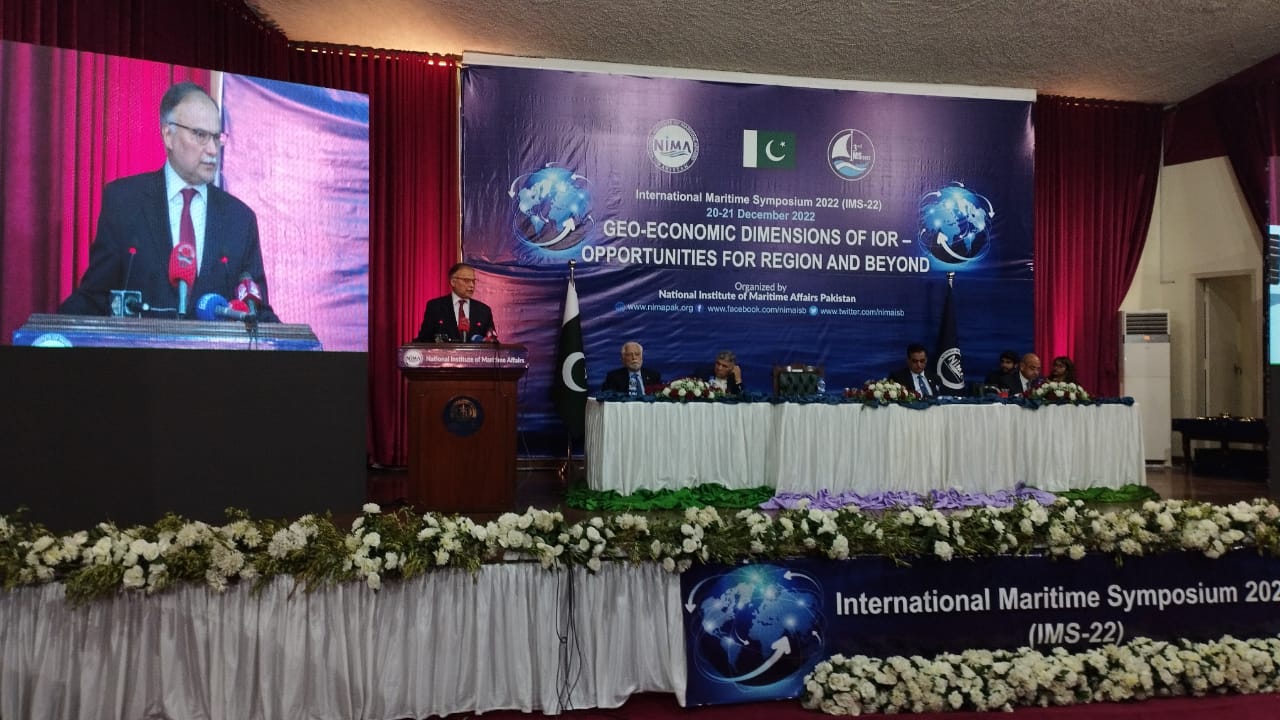 Islamabad, National Institute of Maritime Affairs (NIMA), Islamabad organised third International Maritime Symposium-2022 (IMS-22) on the topic “Geo- Economic Dimensions of Indian Ocean Region – Opportunities for the Region and Beyond”. Prof Ahsan Iqbal Federal Minister for Planning Development and Special Initiatives graced the Occasion as a Chief Guest. The symposium was well attended by galaxy of participants including academia, maritime professionals, foreign diplomats, researchers from think tanks, faculty & students from universities, serving & retired civil and military personnel. The symposium was also widely attended by the reps of print and electronic media. Eminent speakers from home and abroad, expert in maritime domain, addressed the participants. In the inaugural session Vice Admiral (Retd) Ahmed Saeed, DG NIMA, welcomed the chief guest, worthy speakers and participants. He highlighted the objectives and importance of the symposium.
The CNS message, read to the audience, underscored the importance of Indian Ocean Region as it provides major connectivity routes for global trade, and contains vast natural resources such as oil, gas, minerals and seafood. It is imperative for the IOR countries to cooperate so as to accrue maximum dividends from the immense maritime economic potential. The Federal Minister for Planning, Development and Special Initiatives highlighted that immense resources were available in the huge sea area at our disposal and along the over 1000 KM long Pakistani coast. He emphasized that our younger generation is very promising with tremendous innovative capabilities. He emphasized that the political stability is mandatory for the economic growth.

The Keynote speakers, former Ambassadors, Nadeem Riaz President IRS, and Ambassador Inam ul Haq highlighted the significance of strong economy of a country and extra regional powers rivalry in IOR. Admiral Asif Sandila former CNS and President Board of Advisors of NIMA, while highlighting the importance of the Indian Ocean Region said, that it is hub of major sea routes which connect oil rich Middle East, with rest of the world through choke points, like Strait of Hormuz, Babel Mandeb and Malacca straits. The smooth flow of trade is important not only for the IOR but also for the global economy.

The learned speakers of second session, deliberated on the geo-strategic environment of IOR especially interest of major powers like USA and its allies and China. It was underlined that all the littorals of IOR and extra regional powers want to ensure uninterrupted flow of maritime traffic and no illegal activities like terrorism, drug and human trafficking and piracy. The chief guest of Session-II, Admiral (Retd) Muhammad Zakaullah NI(M), former CNS, while highlighting the significance of BRI, said that China has gained extended economic reach in IOR. He also mentioned that global order is in changing phase and multipolarity will soon be a reality once again. USA, her allies and India are trying to contain China. How far they would be successful is yet to be seen. The session was moderated by Rear Admiral (Retd) Farrokh Ahmad HI(M).

The speakers of the third session underscored the “Maritime Cooperation in IOR for Regional Development. The session was moderated by Vice Admiral (Retd) Syed Khawar Ali Shah HI(M). Dr. Anjum Sarfraz from NIMA highlighted the potential of Pakistani ports as transit and transshipment hub. He apprised that Eastern and Western routes are available from the ports to Kunjarab and Khyber passes for the transit trade to Wester province of China, Afghanistan, and CAR States. Efforts be made to increase the volume of trade for the improvement of the economy. The Gwadar port has right location as a transshipment hub. Its channel needs to be dredged to its designed depth on priority.

Prof Dr. Mehmet Seyfettin Erol, CEO of Ankara Center for Crisis and Policy Studies (ANKASAM) highlighted the importance of regional Maritime connectivity from Eurasian perspective. He was of the opinion that regional connectivity facilitates trade, which is one of the major instruments for improvement of the economy. While talking about resolving the regional disputes, he opined that dialogue is the best course of action.

Dr. Petr Topychkanov, Associate Senior Researcher from SIPRI, spoke on Maritime Interdependence for a Shared Future. He highlighted that technological developments in maritime sectors demand cooperation. While talking about crisis in Europe he said that these have provided many lessons. Dr. Sameer Iqbal from Texas University dilated upon the importance of maritime based renewable energy. He stressed that Pakistan can meet the shortages of energy requirement by using maritime based renewable energy from, solar, wind and geo- thermal. The talks of the speakers generated healthy discussion during question-and-answer sessions. The Chief guest of this session Admiral (Retd) Afzal Tahir former CNS, while talking about the low performance of Gwadar port said that, the initial Concession Agreement with Singapore Port Authority (PSA) did not contain the milestones and the same was later on transferred to China Overseas Port holding Company (COPHC). He said that transit trade to China from Pakistani ports will not take off till China decides to develop their Western province. At the end of each session souvenirs were presented to the speakers, moderators and the chief guests.