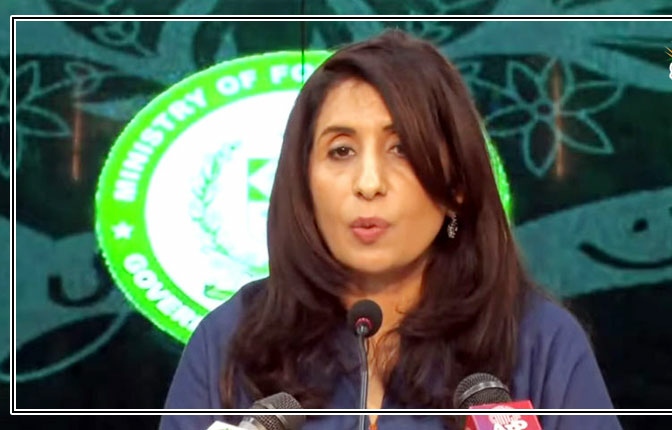 Transcript of the Press Briefing by the Spokesperson on Thursday,
08 December, 2022

[This is a rush transcript. This copy may not be in its final form and may be updated]

Assalam-o-Alaikum. Thank you for joining us for the Weekly Briefing.

Foreign Minister is on a 3-day visit to Indonesia and Singapore. He landed in Bali, Indonesia last evening and will travel to Singapore tonight.

Question:​Once again, the US State Department has put an allegation on Pakistan having sanctuaries of TTP. Would you like to comment? Do you agree or disagree? (Adeel Bashir, Roze News)

Supplementary Question:​US Secretary of State in his recent statement regarding situation in Afghanistan shared concerns about Taliban. How does Pakistan view this?

Secondly, It was reported in media that an agreement was ended by TTP. Can you share that with whom this agreement was signed and when did this agreement take place? Also there were discussions regarding negotiation. Who was doing these negotiations and what was its official status? If such negotiations took place what were the demands of TTP? Please share some details? (Khawaja Nayyar Iqbal, Media Today)

Pakistan is a country that has suffered enormously from terrorism for the last several years. Instability in Afghanistan and our region has created a situation that has resulted in the loss of lives of civilians and law enforcement officials. Pakistan is a victim of terrorism. There has been undeniable proof of India’s direct involvement in state sponsored terrorism inside Pakistan because of which our society has suffered a lot. The international community should take notice of this reality.

Question:​What are your comments on the Joint Communiqué Issued after First India – Central Asia Meeting of National Security Advisors/Secretaries to the Security Council which was held in New Delhi on 06 December 2022? (Zeeshan Ali Bhatti, PTV)

Answer: We have seen those statements. Those statements reflect the understandings that these countries had amongst themselves and the joint statement speaks for itself. What I want to say is that Pakistan has time and again expressed its concern about terrorism that emanates from India. It has deep roots and it is state sponsored. We urge the international community to take notice of India’s deceptive approach that it undertakes while pointing fingers at others.

India’s efforts to portray itself as a torch bearer of counter-terrorism efforts are ironic. A country, that is vigorously engaging with other countries on the subject of terrorism, is itself involved in a relentless terror campaign in Indian Illegally Occupied Jammu & Kashmir. Its involvement in inciting terrorism inside Pakistan is widely established and documented.

Question:​You have explained the current situation in IIOJK. But recently offices of Jamat-e-Islami and other religious organizations have been sealed. Since you urged the international community to take cognizance on these issues, is there any discussion going on to take measures directly for a ceasefire and also against these Indian actions and on the issues faced by journalists in IIOJK? (Raziq Mehmood Bhatti, Daily Kashmir Express)

Question:​In a statement regarding attack on Pakistan Embassy in Kabul the spokesperson of the interim Afghan Government said that a person has been arrested for involvement in this attack and that he is a foreigner. Have they shared any details with you regarding the identity of this individual and which country does he belong to? (Siyar Ali Shah, Khyaber News)

Question:​There are reports that the Pakistani embassy in Kabul is located in a very unsafe area. Is there any realization on the part of the Foreign Office to make enhanced security arrangement for that?

Secondly, we are witnessing that after the ascension of Taliban in Afghanistan terrorist incidents have increased in Pakistan. Has the Foreign Office and for that matter, Pakistan, taken any steps to check the infiltration of these terrorists from Afghanistan? (Abdul Hadi Mayar, Hum Pashto 1 News)​

Answer: As I said in my statement, we have seen reports and statements and some claims regarding responsibility of the attack on the Pakistan Embassy compound on the 2nd of December. We are in contact with the Afghan authorities and are pursuing discussions with the objective of identifying and holding accountable the individuals or organizations that are behind this attack. We believe that this attack is a reminder that terrorism continues to pose a threat to peace and stability in Afghanistan and the region.

Now on the question regarding security of our embassy compound, I would like to assure you that since the incident on 2nd December, the Government of Pakistan has increased the security of its diplomats and our missions. We are in contact with Afghan authorities in this regard as well. I will not go further into the details of security related matters.

On your second question – In our weekly briefing last week, I briefed you on the recent visit of the Minister of State Hina Rabbani Khar. I shared with you, if you would recall, that in her meetings in Afghanistan, the Minister of State discussed all issues of interest and concern for Pakistan. The Afghanistan side has assured that the Afghan territory will not be used for terrorism against Pakistan or any other country. We hope that they will respect their promises.

Question: ​According to some media reports a new map has been issued in which Khyber Paktunkhwa is shown as part of Afghanistan and Afghanistan is working on it. What is Pakistan’s view on this please? Allah Noor, Mashriq TV)

Answer: We have seen some social media posts. Pakistan has clearly defined and internationally recognized borders. Things that you may see on social media could be somebody’s wishful thinking and not the reality.

Question: ​Last month Saudi Crown Prince Muhammad Bin Salman was expected to visit Pakistan but it was shared that the visit has been postponed and will be rescheduled. Can you share whether it has been rescheduled or not?

Secondly, can you confirm that a high-level delegation from Pakistan including Chief of Army Staff is visiting Saudi Arabia or not? If yes, when will this delegation visit Saudi Arabia? (Aamir Saeed Abbasi, Dunya TV)

Answer: I said last time and I will repeat again this time that whenever we have information regarding finalization of the visit of His Royal Highness Prince Mohammed Bin Salman we will share it with you.

Right now, I do not have details regarding any upcoming high-level visit to Kingdom of Saudi Arabia.

Question: ​India refused to issue visas to blind cricket team of Pakistan. Obviously, such decisions are political in nature. The reason that these questions are put forward is that there are no sports exchanges between India and Pakistan. Does this mean that India will boycott the Asia Cup and Pakistan will boycott the World Cup to be held respectively in Pakistan and India?

Second question is Chinese President Xi Jinping is in Saudi Arabia. Both Saudi Arabia and China are strategic partners of Pakistan. How Pakistan views such a development, keeping in view BRI and CPEC? (Shoukat Piracha, AAJ News)

Answer: Regarding your second question, I would say that yes you’re absolutely right. Pakistan has very good relations with both China and the Kingdom of Saudi Arabia. We are strategic partners and there is a great deal of goodwill between Pakistan and these countries. We are happy to see whenever our friends engage with each other. So we welcome the visit of President Xi Jinping to the Kingdom of Saudi Arabia.

Regarding your first question, I would say that it is based on speculation and it is a bit premature for me to comment on that.

Question: What is your take on foreign minister Bilawal Bhutto Zardari’s official visit to Qatar, as Pakistan’s football team is not participating in that tournament? (Mazhar Iqbal, PNN News)

Answer: Pakistan has welcomed and shares the pride of Qatar to be the first Muslim country that is hosting the FIFA World Cup. With the pride that the Qatari Government and people have for hosting this World Cup, they have invited leaders from around the world, including from Pakistan. Our Foreign Minister was invited in that context.

Question:​Can you share any update regarding the Pak-Iran gas pipeline project, as Pakistan is facing huge problems particularly for procurement of natural gas?

Secondly, if you can share any update regarding the Reko Diq project which is a big asset for Pakistan?

Thirdly, can you please comment on the procurement of oil from Russia? (Khawaja Nayyar Iqbal, Media Today)

Answer: On your question about Reko Diq, this matter is being considered at senior levels of Government and the Prime Minister himself is taking interest in that. So I can only say that we are following the developments very closely and want a good outcome on all aspects of this issue.

On your question regarding the import of oil from Russia, recently the special adviser of the Prime Minister Mr. Musadik Malik undertook a visit to Russia, where these issues were discussed. There was a detailed press conference by Mr. Musadik Malik after his visit. I would invite you to see the transcript and if needed, we can also share a link with you directly.

We are in touch with Russia and other partners regarding purchase of crude oil and this is something which is at various levels of discussion. We can share with you more details when it is time to make them public. However, Mr. Musadik Malik has given some details about his Russia visit, and perhaps that statement can give you a better understanding of where things stand.